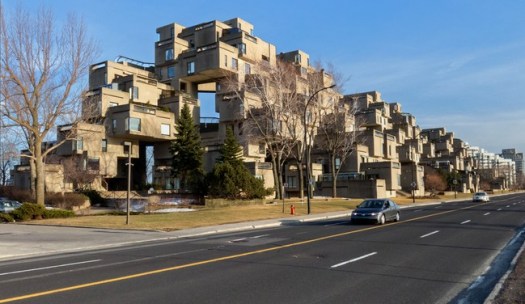 “How do you live with all that cement,” my schoolmates would ask. “With delight” was the only answer. They understood once they visited.

Part childhood memoir, part ode to brutalism itself, this piece by Blake Gopnik touches on his experiences living in Habitat 67 while celebrating the return of a form that many openly reviled for decades, but have now gradually come to like, even treasure. (Of course, not all is well for brutalist forms: Tadao Ando's Piccadilly Gardens in England is slated to be demolished after vigorous complaint by local residents.) However, those buildings that have survived the wave of demolitions are being increasingly valued for their spartan, bulky beauty: Canada's government is issuing a stamp celebrating the 50th birthday of Habitat 67, and oddly enough tours of the specific apartment Gopnik used to live in will be offered to the public. As Gopnik writes: Habitat’s 158 fill 365 cast-concrete boxes, piled 11 stories high in a madcap mess of cantilevers and bridges and perilous open spaces — like (guess what) a stack of children’s blocks. For sheer sensory excitement, Habitat could ...