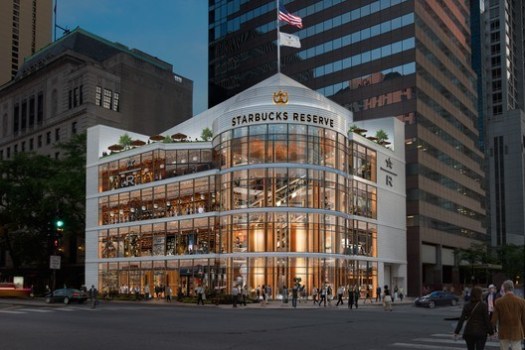 Coffee behemoth Starbucks has announced plans for their third U.S. “Roastery” store to be located on North Michigan Avenue along Chicago’s Magnificent Mile, one of the most well-known retail streets in the world. When completed in 2019, the four-story, 43,000-square-foot space will constitute the largest Starbucks location in the world.

The new Chicago Roastery will share much in common with the original Starbucks Reserve Roastery, which has operated in the company’s home city of Seattle since 2014. The Roastery model goes beyond the standard storefront model, offering a “fully sensorial coffee environment dedicated to roasting, brewing and packaging its rare, small-batch Starbucks Reserve coffees from around the world.” The Chicago store, which is being converted from a former Crate & Barrel retail space, will feature a variety of brewing methods and special Reserve-only beverages.

“Having opened our first Starbucks store in Chicago nearly 30 years ago,

first outside of Seattle, this is a very special city for me. At the time, it was a true test for Starbucks because the Chicago customer is so savvy and discerning about their coffee,” said Howard Schultz, Starbucks executive chairman. “Chicago is a city of neighborhoods, so we took our time to find an incredible space to match the unprecedented coffee experience our premium Roastery will offer. To be located on one of the best-known retail streets in the world is a proud moment for all of us and we can’t wait to bring Chicago and the world a coffee experience worthy of their most premier real estate.”