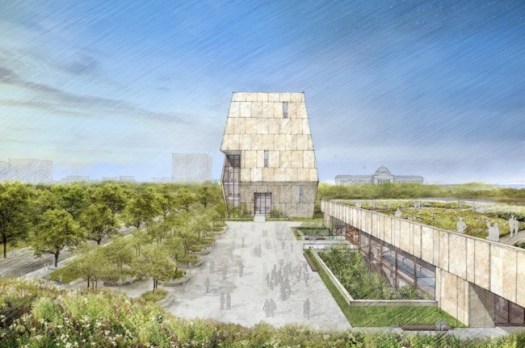 As promised, initial designs for the Obama Presidential Center by Tod Williams Billie Tsien Architects were released today. The Center will be composed of three buildings—the Museum, the Forum, and the Library—that surround a rectangular plaza. The four primary sides of the Museum, the tallest structure on the site, are hexagons, sloping out as they rise before tapering back in about a quarter of the way up the building. In the drawings, the Museum, as well as the other two buildings, appears to be clad in stone. The façades are punctured with a few narrow rectangular windows. On the south-western corner of the Museum, a chunk is cut out of the bottom half and the resulting vertical surfaces of the indentation are glazed. On the opposite corner, the top half is cut out, producing a balcony. A large entrance on the southern side leads out to the plaza via ramp. The Forum and the Library line the southern and eastern edges of the plaza. They will be single-story structures with terrac...