The Lucas Museum of Narrative Art has had a tough time getting going. After shuffling around potential sites in Chicago, and dealing with some litigation, the art collection and archives of superstar director George Lucas finally found a future home in Los Angeles’ Exposition Park. Now, new designs for the museum by Chinese architect Ma Yansong of MAD Architects have been revealed. The new designs retain the sinewy look of the old ones, but present a more compact structure. The museum will comprise a four story, 115-foot tall building with 300,000 square feet of floor space. Split into two wings, it will include two theaters as well as archives, offices, classrooms, and a library. The wings will meet on the fourth floor, creating a large exhibition space. The fifth level will also feature exhibition space as well as a restaurant. A massive subterranean garage capable of housing 2,400 vehicles will 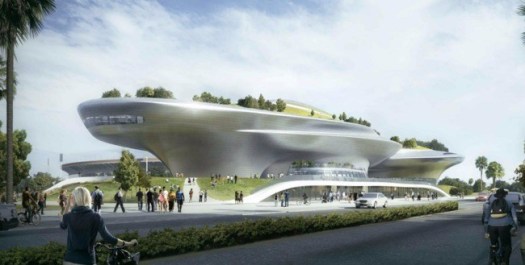 capped with 11 acres of parkland.

The staggering cost of the project—an estimated $1 ...