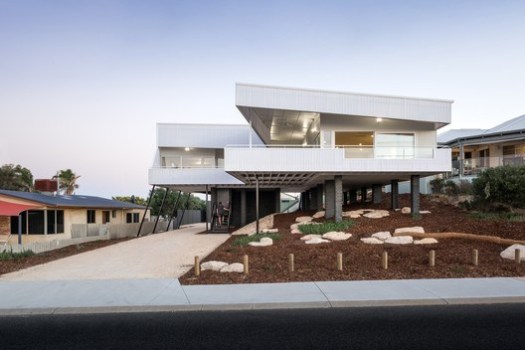 From the architect. The Falcon House challenges the inappropriate, contemporary approach of destroying the native landscape and topography. The upper level hovers gently as a white object, the lower level is a black shadow, in the middle is a thin zone of grey that reminds us that nothing is ever ‘black or white’.

The site is opposite a respected surf break called Gueries, named after an early surfer and resident who still lives behind this site and in his youth, repeatedly drove his car down the 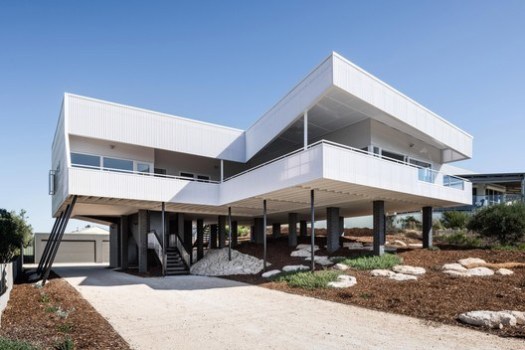 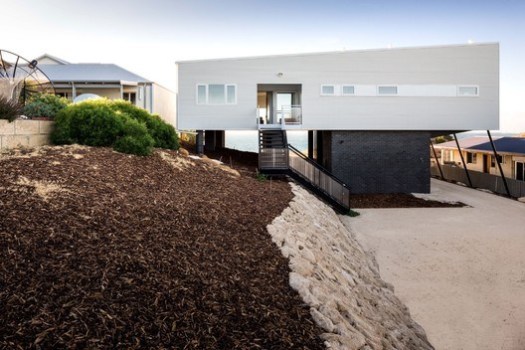 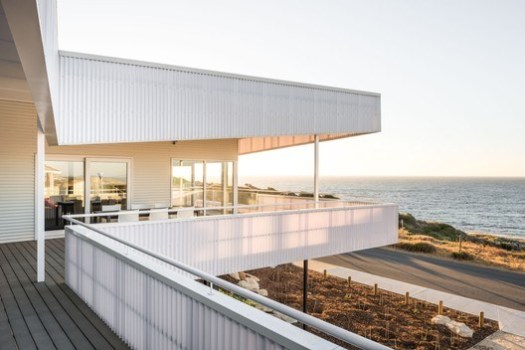 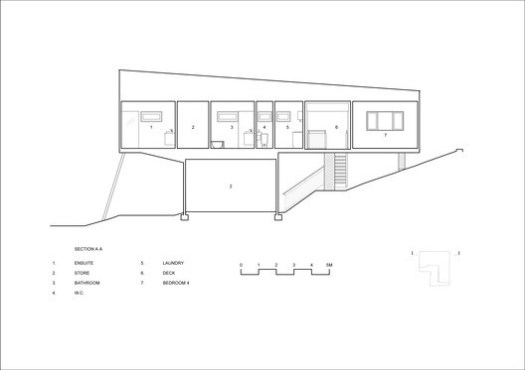 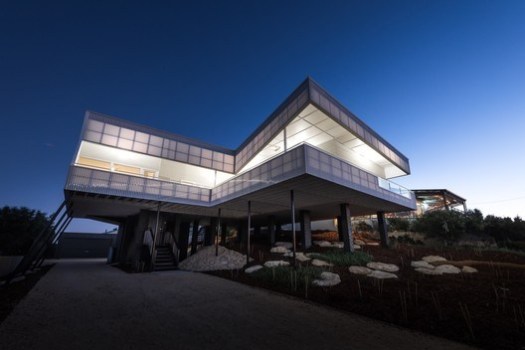 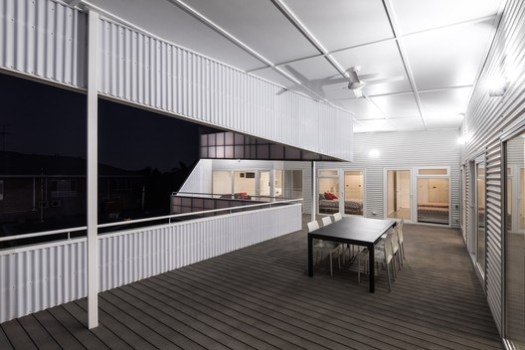 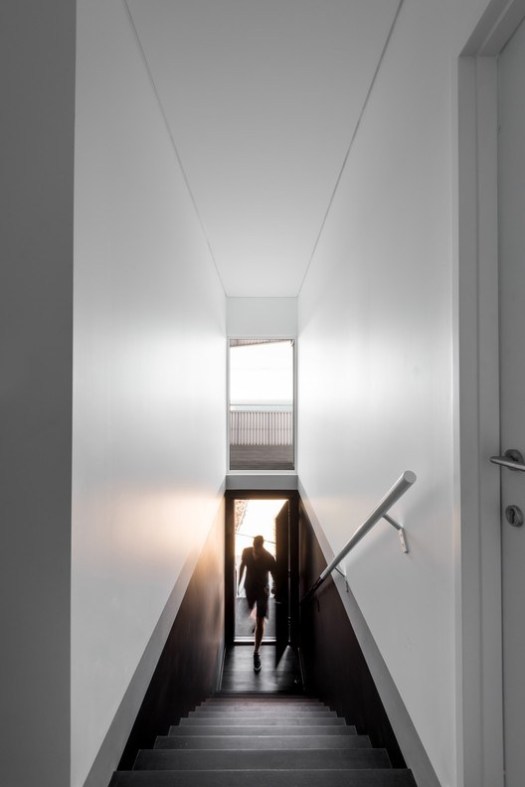 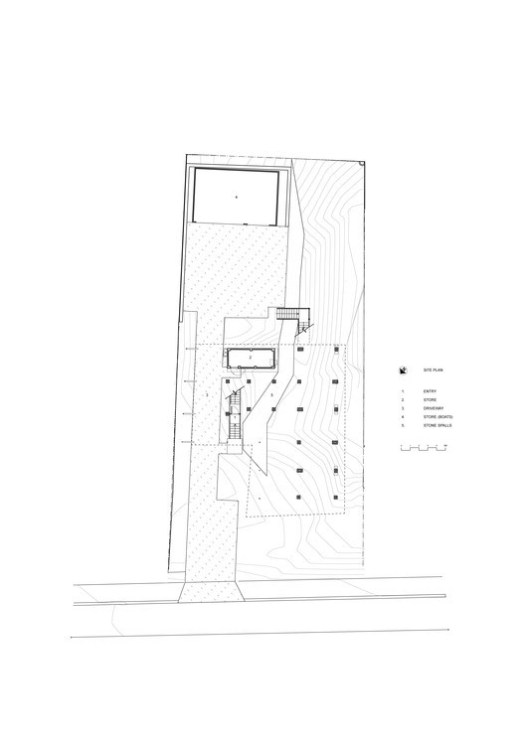 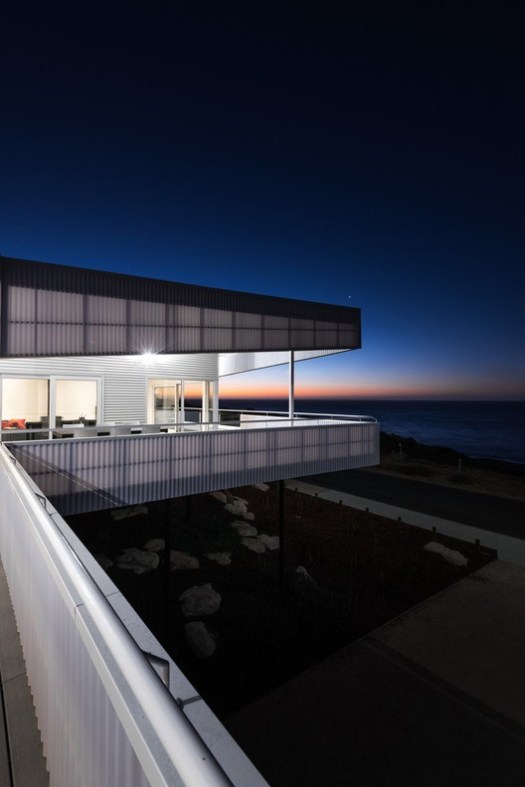 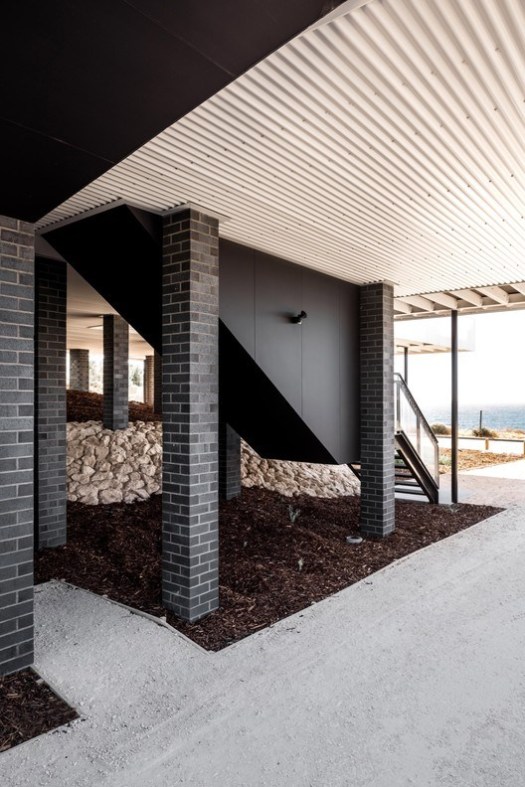 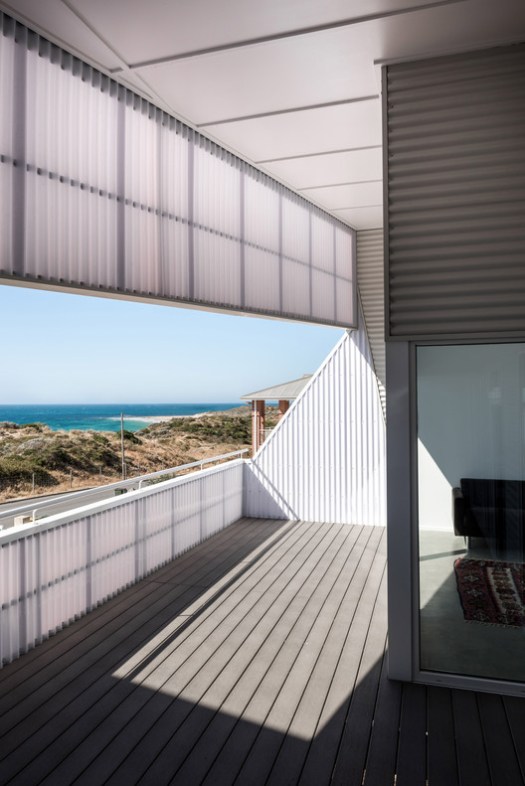 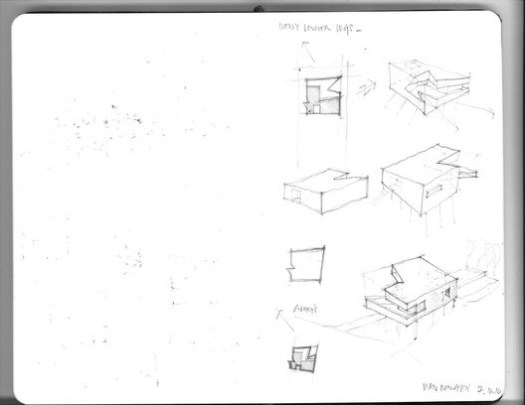 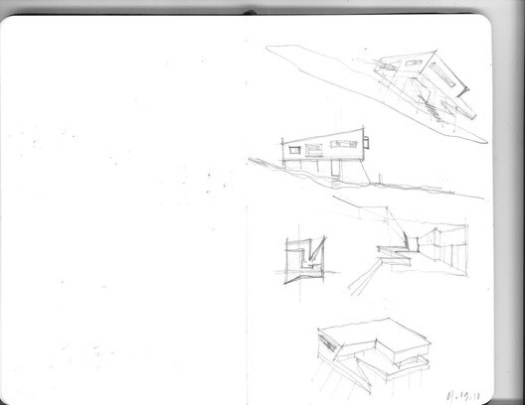 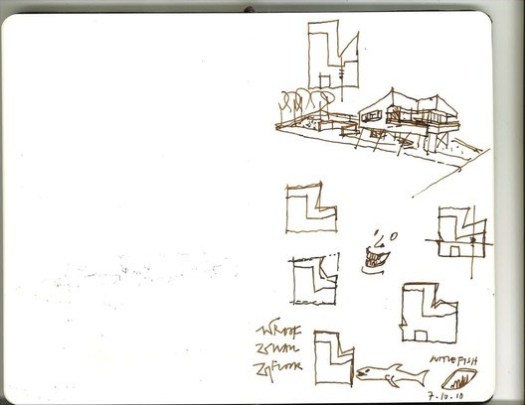 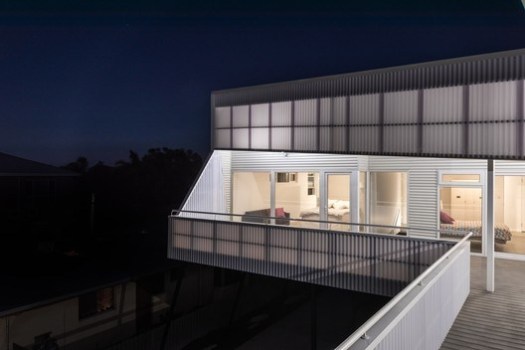 forming a blow-out that, ironically now provides the best view to the ocean.

The Falcon House is a part time dwelling between city and country, a place for the family to gather and share beach time adventures and create precious memories. It hovers above the ground resting precariously on a series of cranked steel columns and brick piers. It is a homage to the rapidly disappearing built heritage of 1950s’ and 60’s weekender houses built with economy, robustness and restraint.

The upper level is purposely neutral, acting as a backdrop that focuses attention to the vast Indian Ocean, a support system of white and neutral surfaces reflecting light and image.  The lower level is a short-term place of discovery, the underbelly of the upper level presses against the undulating natural ground. Covered in native species from the adjoining sand dunes and scattered with inhabitable limestone rocks, this place is one to discover and create adventures.

Our client now has two houses to fluctuate between, the city dwelling and the ocean fringe dwelling. One is dark and heavy, this in contrast is light and liberating. A place of contemplation but also a place to bring the family together. The upper level spaces are loosely defined to allow alternative modes of inhabitation between the quiet moments of being alone and the active moments of young grandchildren scooting around the house and deck. It is robust and easily tolerates the daily abuse of kids play and the beach wanting to invade the house.

The house relates to both the built and unbuilt context with sensitivity that rarely exists with recent projects. The elevation allows the ‘natural/ topography of the sand dunes to continue uninterrupted under the house. Local native species fill this area. It relates to a rapidly disappearing built context, a time of great freedom and utopia, Perth’s heroic modernist period refined to meet stringent budgets for holiday homes. It attempts to capture the spirit of a time now past, a way of living that focused around the beach. Modern materials enable the house to become a glowing night time angel.

Our client required a house that was capable of fluctuating between active family gatherings and the solitude of a second house away from family. Spaces were required to find a balance between the generic and the specific, to allow multiple ways of inhabiting the house.

Large spaces act as shells for personalization and change. A large deck allows space for all family members to co-exist in different activities. A band of opal polycarbonate provides privacy, wind and sand protection in a safe and controlled environment.

The project developed from commencement as a close consideration between architect, engineer and builder. This initially began as a cost driven approach to place all three parties together. Decisions were made on a basis that enabled immediate cost assessment, surprising dialogue influenced design but ultimately resulted in design outcomes closer to those of the 50’s and 60’s houses. We were happy with this synergy.

Cost was continually balanced with effect (and impact). The house is elevated, this cost more but lifts one above the dunes providing ocean views whilst simultaneously minimising destruction to the site. Ongoing maintenance was also a major consideration, this environment is potentially destructive, building elements, material selection and detailing combine to provide long term solutions to reduce maintenance.

Falcon House in an old weekender suburb transformed over time by the inevitable suburban sprawl. Now devoid of the modest, low cost holiday homes new homes indulge in a tabula rasa approach removing any sense of native landscape and coastal form. Our Falcon house hovers gently above the native landscape, touching the earth with modesty, respecting the natural topography and demonstrating an alternative form of dwelling that respects the evolution of this place.

The house design orientates north, the elevated floor is insulated concrete to provide thermal mass for winter heat gain reducing heating requirements and cost. The plan is configured to create a large deck protected from the intense south west cooling winds. Natural ventilation opportunities are then maximized through all of the house.

Building elements are designed to protect from summer sun but also intense winter rain and wind. This also minimises ongoing maintenance cost and the associated embodied energy. All materials were selected on a full lifecycle basis with reducing embodied energy being a major concern.Gardens are drought tolerant. Water consumption is minimized and power consumption reduced by natural lighting, low energy consumption fittings and balanced with photo voltaic cells.