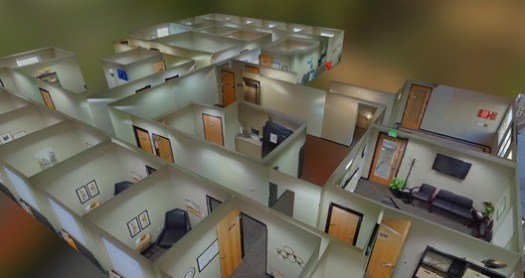 via screenshot from model on Sketchfab An upcoming app, named Walkabout Worlds, is hoping to drastically simplify the process of creating a 3D model of existing spaces. Designed as both a tool for turning 360 photographs into 3D models and for creating photographic 3D walkthroughs for VR viewing, the app has turned heads for its demonstration that a 360 photograph can be converted into a rough, simple 3D model in as little as a minute by selecting key points in the image such as the corners of the room, as shown in the video below. However, with a little more time, the app can be used to create more refined models and to connect multiple rooms together in a single model: The app's other main function is to offer an easy way to make and publish walkthroughs of existing spaces, similar to services offered by Google Streetview and similar photographic tours. However, while many such walkthroughs can lack a feeling of real immersion when viewed in VR, "the 360 walkthroughs [from Walkabout Worlds] are meant to be like a real walkthrough, not just a collection of 360 images with big jumps in between," explains the app's creator Kevin Davies. "They are meant to give you a real sense of walking through a place" by reducing the spaces between successive images, adds Davies. These "walkabouts" can then be published online directly from the app and viewed with Walkabout World's own custom viewer (an example can be seen here). The Walkabout Worlds app is scheduled to be released for public beta in early May, and will be free to download and publish a small number of models or walkthroughs. To publish more than 5 models or walkthroughs with more than 3 images will require a monthly subscription. News via Walkabout Worlds H/T 360 Rumors