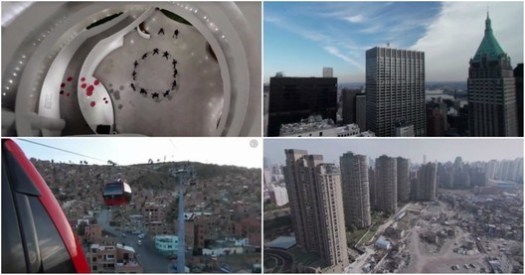 via The New York Times Daily 360

With 360 camera technology, the ability to transport people into a space through film has become all the more immersive. Viewers are able to turn the viewport in every direction to see the whole scene, or even to put on a headset for a more natural way of viewing a scene. Of course, this has important implications for viewing architecture, which many believe has become too image based, and therefore two-dimensional. 360 videos leave no corners conveniently hidden, as a traditional video or image would, perhaps providing a fuller picture of a place - could this perhaps open up a more human-scale understanding of space?

The New York Times have treated their Facebook followers to some great architectural insights through their Daily 360, getting more than their money’s worth out of their 360 camera equipment. Some of these must-see videos include a dance

taking place in the Guggenheim Museum’s rotunda, as well as an aerial view of La Paz, Bolivia. Read on to take a peek into the richness of earth’s urban spaces: