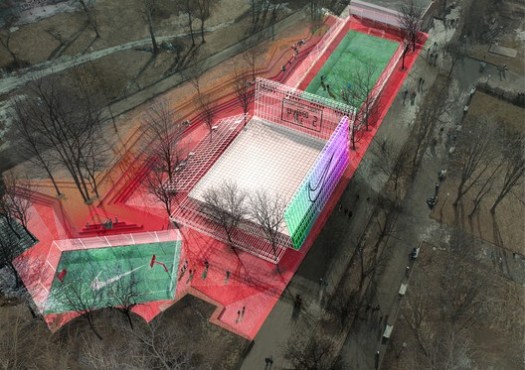 Global sportswear brand Nike, in collaboration with Moscow’s Strelka Institute, has announced the winners of the competition to design a new Nike sports facility in Gorky Park, located at the heart of Moscow. The competition asked five of Russia’s leading young architecture studios – Kosmos Architects, Rhizome, Novoe, Crosby Studios and Xора – to envision a “unique architectural object” that seamless integrates into the surrounding park environment, creating a landmark hub for sport and physical activity for Russia. 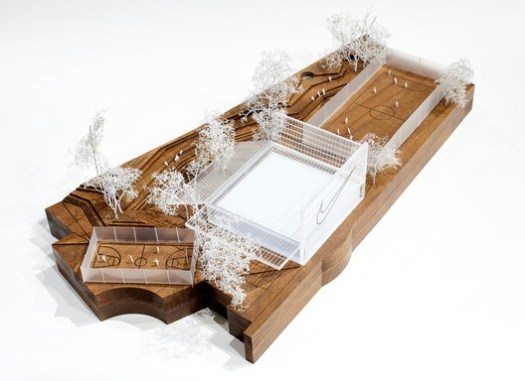 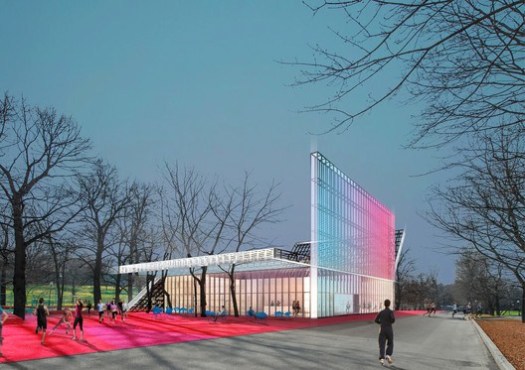 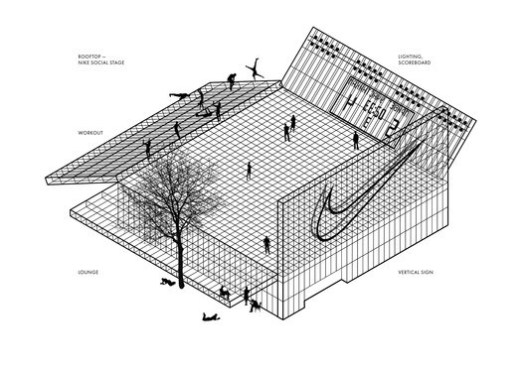 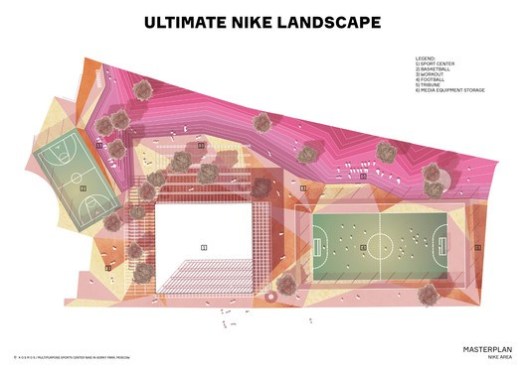 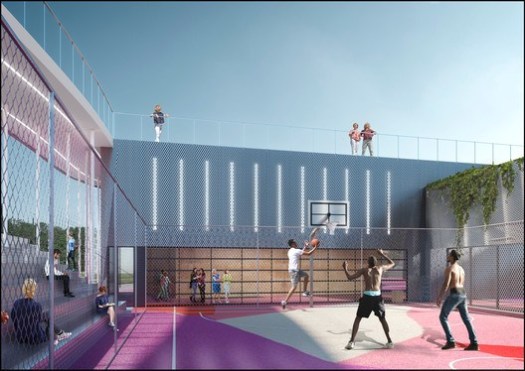 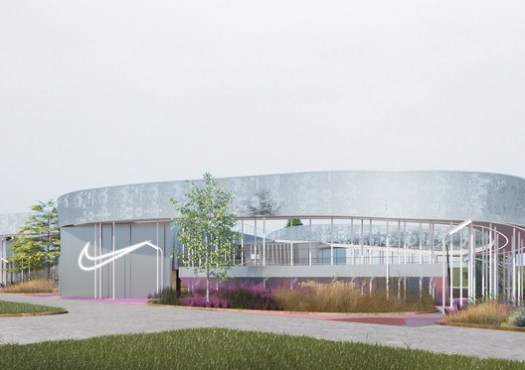 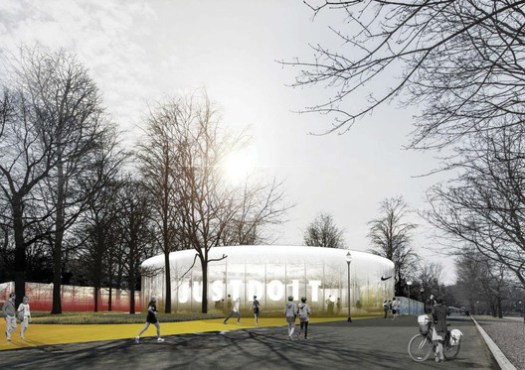 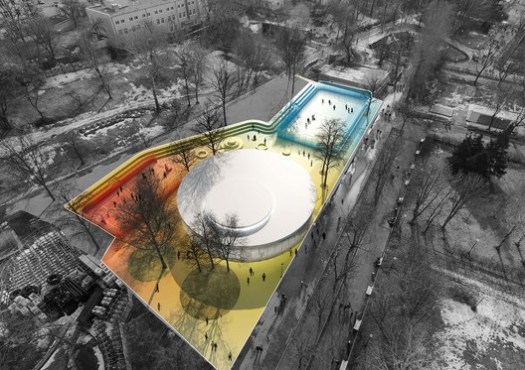 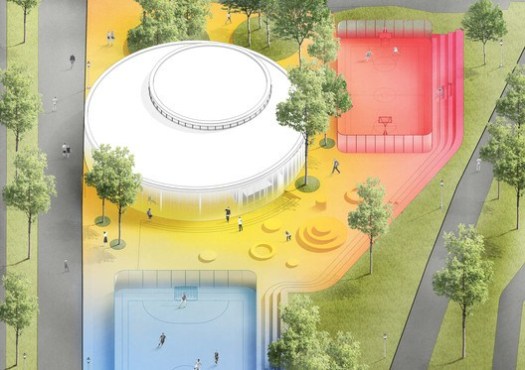 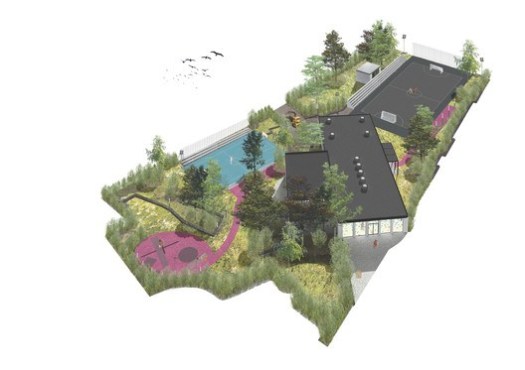 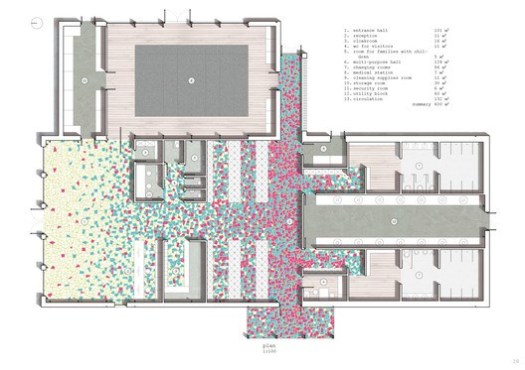 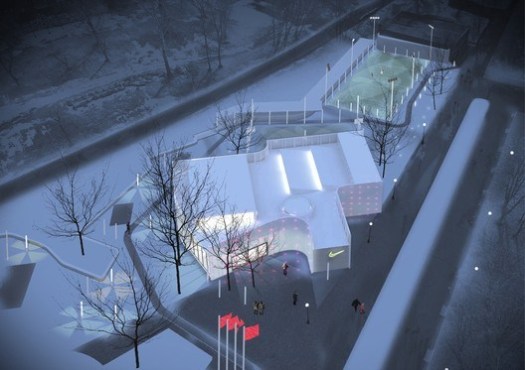 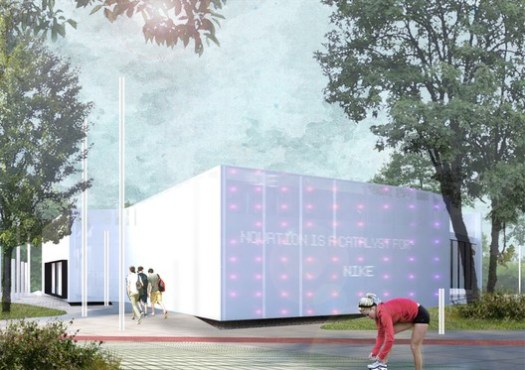 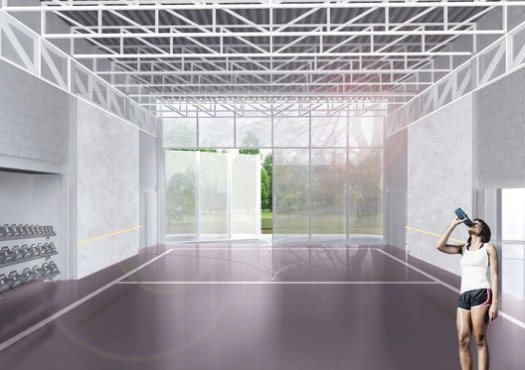 be operational year-round, the design needed also to be adaptable for each of the seasons. The project will be built in 2017.

“In this competition, I was looking for a daring reinterpretation of the relationship between architecture, movement and athleticism, which I believe is at the core of the brand; projects that will inspire people to challenge their built environment and bodies through physical activity,”  said Ippolito Pestellini Laparelli, OMA partner. “This competition has been interesting as it shows the thinking of the city's emerging architecture studios and at the same time tries to develop new directions on the idea of an urban playground.”

See all of the finalist projects below, with descriptions from the architects and comments from Pestellini Laparelli.

The project of Nike sports center in Gorky Park, proposed by “Cosmos” bureau, is based on the idea of Nike Air Box. Project is presented as a universal sports “installation” out in the open.

General plot plan is divided by a few functional zones, which are football, workout and basketball zones with pavilion being in the very center. Existing retaining walls and the terrain itself are united in a single landscape installation that serves both as grandstands for spectators and a stretch zone.

Side A: “a sign” – open - work interactive billboard. This side may fulfill informative goals and be used for video art.
Side B: “a shed” – horizontal metal open-work shed, that shields the sun, thus forming public and outdoors recreation area.
Side C: “3D-workout” – 3D wall, which represents a park infrastructure for stretching, workout, pullups and other activities.
Side D: “Scoreboard” – inclined metal surface over the pavilion with all necessary equipment to illuminate the field and to demonstrate the score.

Interior concept represents the idea of interactive chameleon with lots of glass and mirror surfaces to visually increase the building and create a feeling of ampleness and openness.

“This project appeals to me as it’s trying to solve how architecture can influence programming of modern sport activities. This construction is also trying to establish itself as a bold signal to the rest of the city. I’m interested by the idea of using architecture as a performative device, serving different purposes and inviting users to physically engage with its presence. This project shows a level of experimentation and the essentiality that embodies the the spirit of Nike.”

The main principle during the design of Nike sports center in Gorky Park was environmental rationality: proportional and comfortable inclusion of different athletes – from football players to sprinters, due to rational division of streams of people. Studio offers to use innovative materials that almost haven’t been used in the design of sport facilities, but have already gained some popularity all over the world.

The main peculiarity of CROSBY STUDIOS’ project is a jogging track that harmonizes the architecture. The running track in the Nike sport complex is coming through the map of Russia and taking to the journey from one city to another.  Therefore the entire sports center has an unusual outline, presented by this track and chaotic thin pillars. Drawings on the floor’s and track’s covering emphasize the locality of the project.

Studio’s architects united the whole number of requests and needs of users in one place and spread it to different flows. Project holds lots of places for recreation and communication between supporters of different sports.

The location can be transformed by means of gates, while floor covering and energy-conserving facilities provide innovativeness and technological effectiveness. Design process hasn’t affected territory’s vegetation and all existing trees were preserved.

“Crosby studios finds an interesting connection between sport center programs and the park as a logical continuation of Gorky park's running routes. At the same time, I find this project extremely articulated. On the one hand it’s interesting to find unexpected connections between programs, on the other it might result in excessive complexity.”

Architects of “Novoe” bureau located sports facilities on the territory of sports center in such a way to save existing trees and preserve the natural landscape. Cylinder shape of a building is based on the park’s environment that assumes the complex to be all-round open. Pavilion is сconstructed on a metal frame, with metal stanchions being the main bearing elements. Football field is located parallel to park’s alleyway and is rounded by just a few trees. Basketball court is located in such a way not to cause any harm to trees on the territory of the complex. Grandstands have been located along the entire retaining wall and were integrated to the whole architecture of the sports center.

The territory is portrayed as the single playing ground and has a single rubber covering. Herewith every functional zone, whether it’s a football field or basketball court, has its own color marker, and those colors blend with each other on the principle of gradient both in common zones and in interspaces. All trees on the territory of sports center are shaped in separate landscaped elements of geometrical shape, which visually facilitates the shape of the pavilion itself.

“Pavilion of Novoe bureau looks interesting and the circular structure has everything in it. It is located in a logical and simple place, interacting with the rest of playgrounds. In this case the approach might have been too schematic.”

“XOPA” architecture bureau focused on three concepts – Moscow, sport and Nike. Architects decided to use the simplest and most natural substances of Moscow. At the same time they used subtle metal structure that alludes both to classical architecture and to the modernism of West coast  including Oregon - birthplace of Nike.

The pavilion is composed of two simple rectangular shapes: the first comprises the multi-purpose hall, while another embraces the entrance hall, dressing rooms, and other servant spaces. The hall has floor-to-ceiling windows along the east wall. The piazzetta at the east wall facing the woods is envisaged as a secluded space for open-air training.

“Creating a temple of sport is a very ambitious task. The historical refrence is very seductive and correct, but the goal is to develop a modern interpretation of the temple idea. The scheme is not rigorous enough to respond to that ambition. This project is technically very efficient, but ideologically building a temple is not as easy. I do appreciate their ambition to question what architecture can be. In terms of sport – I see quality and easy accessibility of all playgrounds.”

Architect bureau «RHIZOME» represents the sports center in Gorky Park as the place that will revive sport’s challenge spirit and the ability to inspire with renewed vigor. sport as the form of social practice, was formed just a century ago having become the powerful tool to form the New Human in the young Soviet country.

The choice of pavilion’s location on the territory has been held under two aspects: the necessity of visual separation from the structure on the southern border and the desire to construct the main pavilion in such a way that the main entrance faced the major flow of park’s visitors.

Pavilion’s main area is a T-shaped hall with additional reception and cloakroom zones. Hall has the direct exit outside on the south, while cloakrooms – through the gallery. Foreside’s main material is a roll silicone on metal structure that shows perfect properties for outside use. Building has a smooth illumination due to the dull diffusing surface, thus resembling both panoramic glazing and blank walls. Back side of the foreside is randomly dotted with LED indicators: dots and running letters, thus making the entire foreside “come to life” in dark hours, with vague lights and captions all over its perimeter.

In the whole, the projected placement of facilities allows to embed all necessary courts, preserve the projected place and structure of the pavilion and to organize zones of different privacy levels – from outdoor areas to private zones for individual training sessions.

"I did find the Rhizome project well organized. It's interesting to see how they related the different sport activities. It has an unusual shape and selection of materials, but it misses the opportunity to programmatically reinvent the the notion of the urban playground."