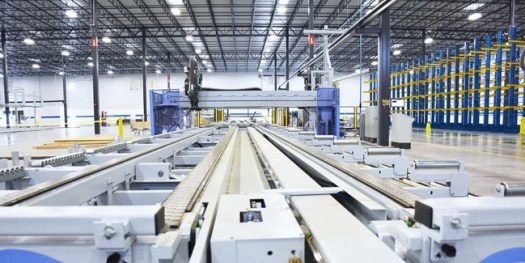 The future of U.S. homebuilding depends on more people like Cyndicy Yarborough, a 26-year-old former Wal-Mart clerk with no background in construction.

In modular construction plants across the nation, robots are putting together lengths of wall, floor and roof elements in panel form that are then shipped to construction sites to help speed up the onsite erection process. In the factories where this assembly takes place, a new breed of worker is being trained to help oversee and package the output of these robots: think of them as the rapidly-trained yet far cheaper version of foremen to a crew of robot construction workers. This Bloomberg article is unabashedly excited about the new jobs this process is creating, and its potential to reduce construction costs (and potentially streamline the construction document phase for architects) by reducing the amount of labor required to assemble new structures. Unsurprisingly, the new factory positions far less than their equivalents in the field, as the article notes:  Labor costs are more favorable for factory construction, according to David Reed, vice president of Champion’s modular ...