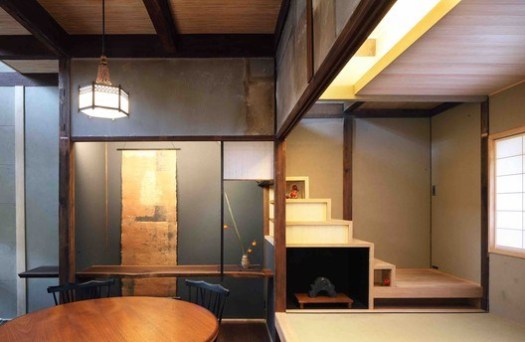 From the architect. The house is a renovation of traditional Kyoto-style machiya for a Japanese client who lives in overseas. As a vacation house in a home country to the owner, the house was designed to create a space of relaxation and atmosphere of country home.

The existing house was built in 1920s, so the original plan was designed to be seated on the tatami, which is a traditional Japanese style. So the plan has been drastically modified to fit into modern living style; however, it's also not to blindly pursue convenience and the focus is to feel the sense of tradition which can only be delineated from the house 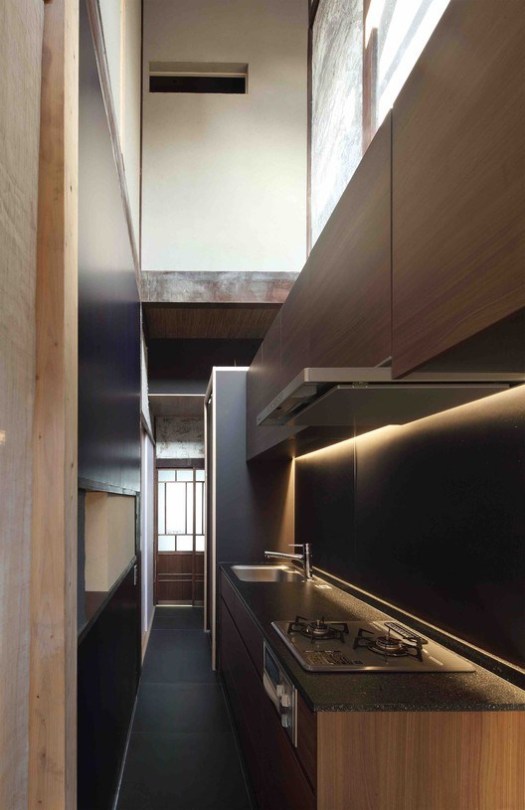 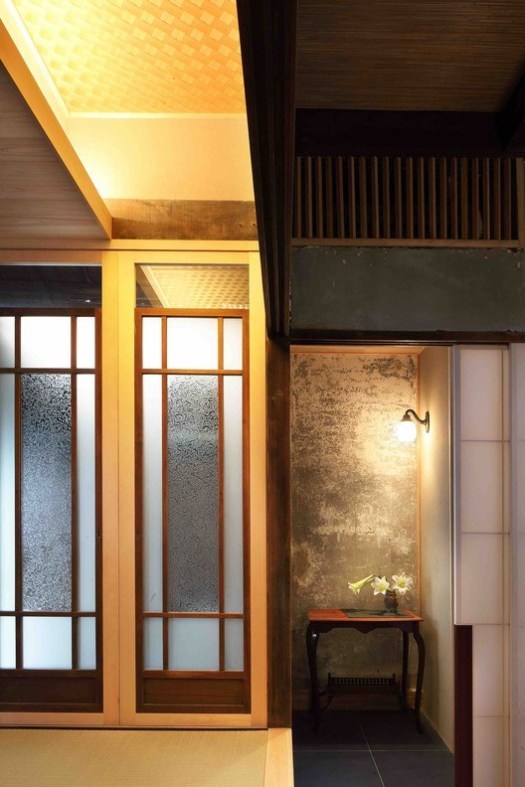 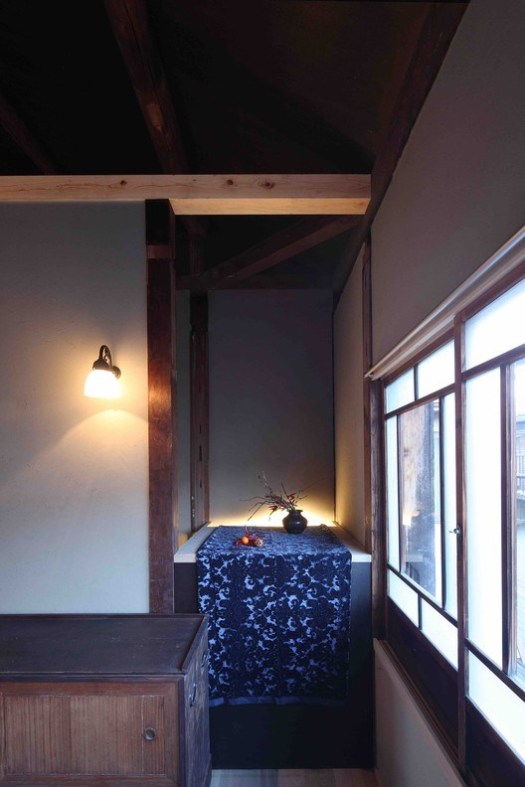 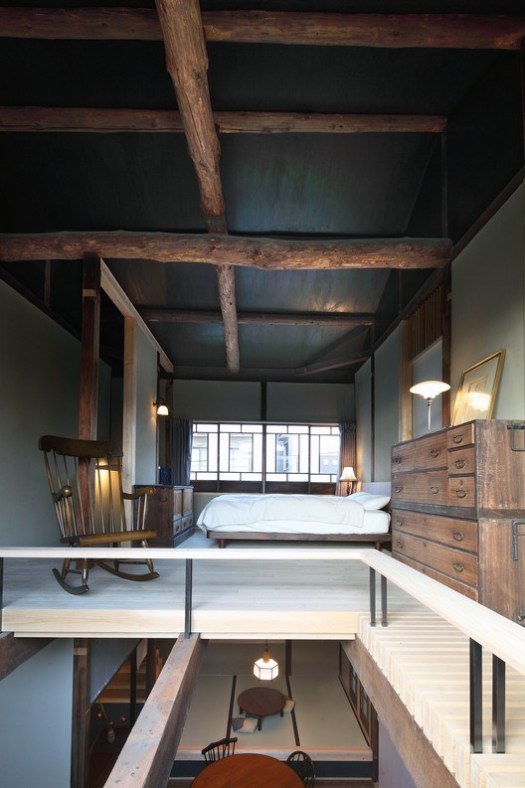 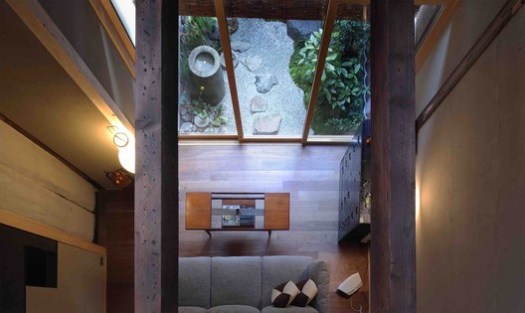 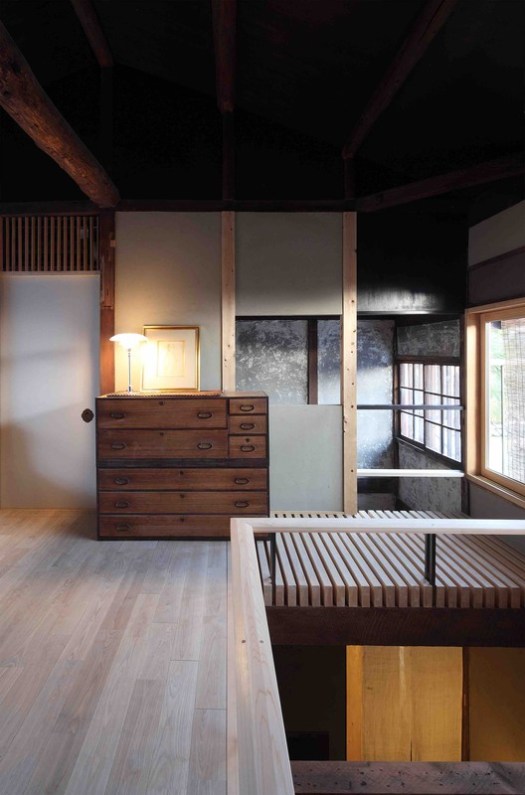 Looking at sunburned and long-standing post-and-beams and fragile Japanese plastering-walls, one feels that concept of memory and time have been capsulated in the building materials. The new design had to pay respect for ancestors and carry as much as possible not to destroy the concept of time captured in the material. In a way, the new design is a collaboration with carpenters from a century ago. And this dialogue through the time-honored architecture surpassing time and space became the central theme of the design.

The new design inherited good character of machiya directly while any inconvenience was drastically altered even if it means to deviate from a traditional style. A typical machiya has low ceiling, so the new design lowered the floor level and removed the ceiling to secure open space. There's an open ceiling in the living room to reduce the sense of compression. Doma, or the dirt floor which runs through the entrance to the back of machiya, is traditionally a walkway as well as wind's pathway and this layout was left intact and retrofitted to a aproach to the bathroom on the back with sunlight coming from the existing high-side light.

Machiya is a wooden construction so there’s air leakage and feels cold, so the renovation could have constructed western-style doors to make it draft-free but instead kept the shoji-screen and japanese curtains to loosely segment rooms which tend to be seen in a traditional Japanese house. By softly segregating the lines of rooms, there’s sense of continuity in wooden structure and plastered walls which broadens the space and reduces the sense of physical narrowness. Old pillars were partly removed and supported by new wooden structure and instead of matching to old coloring, the new material is left untouched. This comparison is visible. The intent is the blend of old and new which is an important theme of the design.

It is well-known that Japanese small garden has function of physically bringing sunlight and wind into the house. At the same time, it’s a critical space to trigger spiritual connection with nature. To connect with nature and attain the sense of continuity from the ground, the level of living room floor is brought down so this continuity lasts while sitting on the sofa.

Instead of typical tokonoma or recessed alcove, the wooden desk with an open space on the back serves this function where seasonal displays can be made.

Selected furniture is not from a traditional Japanese furniture but antiques from England and the U.S. and trying to attain harmony that can only be made in modern era. This can be said to all of architecture materials, interior design and equipment that instead of creating conflicts among different elements, blending these can bring harmony. Japanese culture tends to absorb good elements from outside and blend them into themselves and perhaps this is the way to think about Japanese originality in modern era.