NASA has announced the completion of the initial printing stage of NASA’s 3D-Printed Habitat Challenge, awarding Foster + Partners | Branch Technology and the University of Alaska, Fairbanks as the two top-scoring teams from this round.

After Phase 1 of the competition (won by Clouds AO and SEArch) tasked architects and engineers from around the globe to imagine hypothetical concepts for the habitation of Mars, Phase 2 is challenging designers to manufacture actual, 3D-printed objects using techniques that could be employed to create shelters on a future mission to the red planet or beyond. 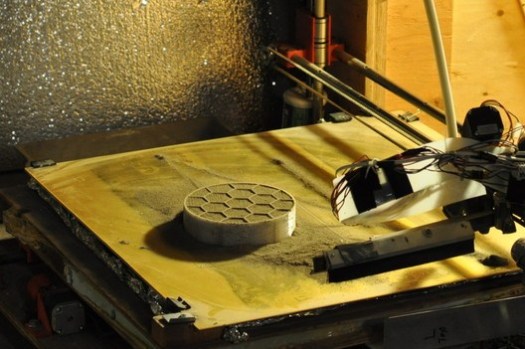 of 3 sub-competitions within Phase 2, Level 1 consisted of the Compression Test Competition, which tasked teams with developing 3D-printable materials, utilizing a 3-D printer, and printing two samples: a truncated cone and a cylinder. Judges evaluated performance from lab test, and awarded each team points within several categories.

Seven total submissions were received, with the top two teams sharing a $100,000 prize. Foster + Partners | Branch Technology of Chattanooga, Tennessee received the highest score, taking home $85,930, while the team from the University of Alaska, Fairbanks was awarded $14,070.

“Seeing tangible, 3D-printed objects for this phase makes the goals of this challenge more conceivable than ever,” said Monsi Roman, program manager of Centennial Challenges. “This is the first step toward building an entire habitat structure, and the potential to use this technology to aid human exploration to new worlds is thrilling.”

Teams will now continue on to Level 2, the Beam Member Competition, where they must print a full-sized beam to be tested. New teams may still enter the competition if they meet minimum requirements.

To learn more about the competition, visit: http://www.nasa.gov/3DPHab

And to register for the competition and for official rules and documents, visit: http://bradley.edu/challenge/

NASA, who recently confirmed evidence of flowing water on Mars, has deemed SEArch (Space Exploration Architecture) and Clouds AO (Clouds Architecture Office) winners of the 3D Printed Habitat Challenge for Mars. Sponsored by NASA and America Makes, the teams were asked to use indigenous materials and 3D printing techniques to build a habitat for four astronauts on Mars.

Will This Be the Concrete Used to Build on Mars?

"All we need now are a new generation of Martian architects to design buildings made of Martian concrete that will be suitable structures for humans to live and work in," concludes the MIT Technology Review in their report on a new type of concrete designed for use on Mars.

This article was originally published by Autodesk's Redshift publication as "Life on Mars? Architects Lead the Way to Designing for Mars With Virtual Reality." If an architecture firm is lucky, it can hit two birds with one stone on a single project-for example, prioritizing both historic preservation and energy efficiency.